Our lab studies the evolution, monitoring and conservation of marine biodiversity. We integrate field studies and cutting edge genetic/genomic tools to address how biotic and abiotic processes result in diversification of marine organisms, and use this data to support marine resource management. Importantly, we do this in the context of educational programs focused on building research capacity, both in the U.S. and abroad. Current research themes in the lab fall into the categories below.

Physical Drivers of Speciation in the Coral Triangle

The Coral Triangle is the world’s most biologically diversity marine ecosystem. While this pattern has been known for decades, the origins of this amazing biodiversity remains an active area of debate. Although some have suggested that this region is a Center of Origin of marine biodiversity, many have criticized this hypothesis for lack of credible processes to promote speciation within the Coral Triangle. A major goal of our work is using comparative phylogeography to identify physical barriers to marine larval dispersal across the Coral Triangle that could promote speciation within this region.

While the biodiversity gradients that shape the Coral Triangle are

well known, this pattern is based on data from a relatively small number of taxa, namely fish, corals and gastropods. We know comparatively little about diversity across most marine phyla, particularly fauna that live within the matrix of coral reefs. We know even less about microbial and viral diversity and how those may be related to metazoan diversity. Our lab is using Autonomous Reef Monitoring Structure to assess biodiversity from viruses to metazoans across the Coral Triangle biodiversity hotspot, and understand how that diversity may be impacted by anthropogenic stressors like pollution and climate change.

Organisms leave genetic traces behind in their environments. Collecting, isolating and metabarcoding this DNA provides novel insights into marine community diversity and how this diversity is impacted by stressor and by conservation efforts. Our lab is using eDNA in a variety of applications from testing the effectiveness of marine reserves to examining historical trends from archival samples. We are also engaged in extensive work developing eDNA methods, examining the temporal and spatial scale of eDNA transport and 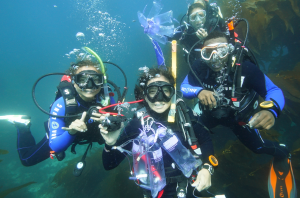 developing novel database resources and metabarcoding primers to expand the application and interpretation of eDNA data.

Ecological Drivers of Speciation in the Coral Triangle

Over-fishing, marine pollution and climate change pose a significant threat to marine environments world-wide. As marine ecosystems represent a major protein source for much of the world, support hundreds of millions of jobs, and are an important cultural heritage around the world, it is essential to use scientific research to promote the conservation and sustainability of these invaluable habitats. A  long-standing focus of our lab is to ensure that our data supports the conservation and sustainability or marine environments around the world.